Menu
Contact Senators Forum
Log in Register
What's new
You are using an out of date browser. It may not display this or other websites correctly.
You should upgrade or use an alternative browser.

17 ways to judge a president

Just came across this and thought it was interesting. The 17 ways to judge a president from Bloomberg:

I'll add #18 which should actually be #1:
18. Uniter Not a Divider and a President for "ALL" citizens not just the expansion of the Democrat Party
S

TheJimer said:
I'll add #18 which should actually be #1:
18. Uniter Not a Divider and a President for "ALL" citizens not just the expansion of the Democrat Party
Click to expand...

This is probably the most important one. I wonder what would be a good metrics for that. Or, maybe there isn't one.

And he is a Illegitimate President!!!!!

More Americans have died from COVID-19 during President Biden‘s first nine months in office than during the first nine months of the pandemic under Donald Trump’s presidency, according to data from Johns Hopkins University.

Despite widely available vaccines and Mr. Biden‘s pledge to handle the coronavirus better than his predecessor after taking office Jan. 20, Johns Hopkins’ Coronavirus Research Center reported that, as of Wednesday afternoon, 353,000 Americans had died this year. That surpassed the 352,000 who died from March 2020, when the pandemic started, to December, when the Food and Drug Administration first gave emergency authorization for vaccines.

#Biden was complaining the other day on the boob tube using #smallpox and #polio vaccines as an excuse to get the #COVID19 vaccine. But, what he didn't mention was with smallpox and polio vaccines, you had to get ONE shot your entire life, but with #COVID the 'experts' have said we'd need up to what five shots a year, or the jab and a booster, or maybe just two shots and a booster. The #LYING #SOB 'experts' can't even make up their minds! #WAKEUPAMERICA YOUR #GOVT LIED TO YOU. 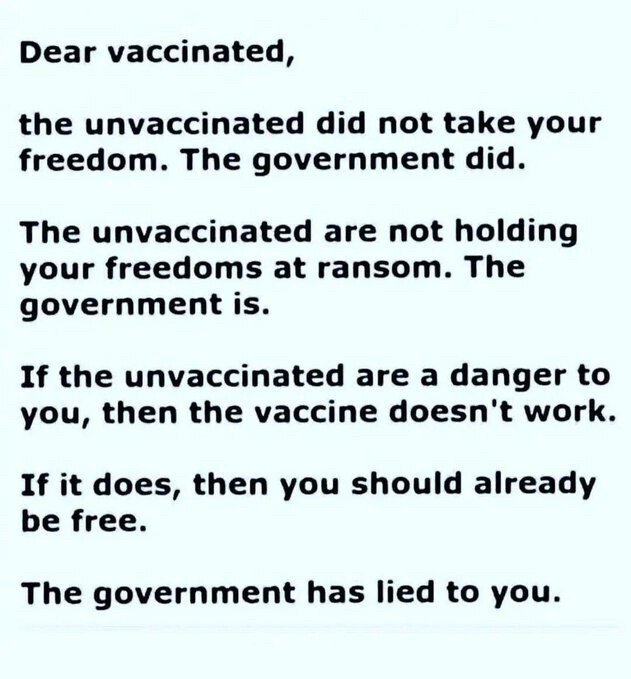 Joe Biden supplied the Taliban terrorist organization and their Islamist accomplices with several years’ worth of US armaments.

Rather than destroying the equipment before leaving the country, Joe Biden decided to leave the nearly $85 billion worth of US military equipment to the Taliban.

Here is a more complete list of US-supplied and left behind equipment list now controlled by Taliban:​

Much of the information included in the above list is public record.

But that was not enough.

Now the Biden administration is going to send the Taliban terrorists millions in humanitarian aid.

It really is as if we lost the war and now we’re paying reparations to the terrorists.
You just can’t make this up!

AND WITHOUT A DOUBT, ONE OF THE DUMBEST PERSON TO EVER, HAVE SET IN THE WHITE HOUSE!!!!!

JOE BIDEN IS A ILLEGITIMATE PRESIDENT!!!!!

THE UNITED STATES IS A THIRD WORLD COUNTRY, BECAUSE WE HAVE RIGGED PRESIDENT ELECTION!!!!!!!!!!!
P

The Arizona Audit Report showed tens of thousands of questionable votes, illegal voting practices, and what appeared to be outright fraud. Experts reported catching people on camera deleting evidence, and intentionally trying to obstruct any investigation into the 2020 election. Ballot envelope images appeared to be manipulated or fake. The County was missing records for hundreds of thousands of votes that didn’t appear to have a corresponding voter. There was enough evidence to show that the outcome of the Arizona election could have been change at least four to five times, likely more. The report also showed that if all of the votes are counted, including those that they believe to be fraudulent, the vote comes fairly close to what the county certified. However, the report cautioned, there are likely a number of fraudulent votes, enough of which could have changed the outcome of the election.

Corporate media, the Establishment’s biggest weapon, quickly promulgated headlines touting The Arizona Audit Report Confirms a Biden Victory! That couldn’t be further from the truth. The report showed FRAUD! The report showed people cheated and manipulated information. But that doesn’t fit The Narrative. Corporate media feeds on power, and it gets its power by manipulating people into believing a version of reality that powerful people want others to accept.

The Narrative says that the Arizona Audit confirmed a Biden victory. That’s simply not true, and a harbinger of the bigger more unbelievable lies they will try to force us to accept if we continue to allow them to dictate an altered reality. The truth is that the report showed fraud…a lot of it. The truth is that Republicans and Democrats obstructed transparency. The truth is that Trump won, and the media doesn’t want America to figure that out.
P

And Biden is as corrupt as they come!!!

On his first day in office, Biden named a law partner of his son’s defense attorney as interim head of the Justice Department’s criminal division, an arrangement that risked running afoul of the department’s conflict-of-interest rules. On the same day, Biden’s brother Frank highlighted his relationship to the president in a newspaper ad for a Florida law firm. Since then, Biden’s other brother, James, bowed out of an energy venture in the U.K. following a White House ethics review, according to the Financial Times.

Report: Hunter Biden Said Offer from Powerful Chinese Investor Had ‘Everything to Do with My Last Name’​

More than 50 former senior intelligence officials have signed on to a letter outlining their belief that the recent disclosure of emails allegedly belonging to Joe Biden’s son “has all the classic earmarks of a Russian information operation.”

AND THEY ARE INTELLIGENCE OFFICIALS,


In DC, perjury is not simply tolerated, it is rewarded. In a city of made men and women, nothing says loyalty quite as much as lying under oath.​

The US Senate has verified that the Biden corruption scandal is not Russian disinformation; it is real. Biden insider-turned-whistleblower, Tony Bobulinski, submitted thousands of pages into evidence that included direct testimony, financial records, text messages, emails, documents and audio recordings. The Senate has confirmed Bobulinski’s evidence as genuine. Bobulinski’s evidence makes it crystal clear that Joe Biden had direct knowledge of the Biden family’s ongoing, decades-long, worldwide influence-peddling scheme, which Biden lied to America about.

WASHINGTON (TND) — According to emails obtained by DailyMail.com, President Joe Biden may have shared a bank account with his son Hunter Biden, who is the subject of a federal investigation that is reportedly looking into possible money laundering and illegal foreign ties.

Emails from Hunter Biden’s infamous abandoned laptop revealed that the father and son potentially shared at least one bank account and paid each other’s bills, an issue that raises questions about possible corruption.

DailyMail.com reported that a former federal prosecutor, and expert on money laundering and criminal tax law, who spoke to them on the condition of anonymity, indicated that if money was indeed passing between Hunter Biden and his father it could make for a case to include the-now president in the probe that is currently taking place into his son’s financial dealings.

ONLY IN AMERICA YOU CAN BE SO CORRUPT, AND BE THE PRESIDENT OF A RIGGED ELECTION!!!!!!

In the predawn hours of Jan. 25, more than a dozen FBI agents raided Roger Stone's home in South Florida and took into custody one of President Trump's closest longtime confidants.

Roger Stone, the political operative who was convicted of obstructing an investigation of Russian interference in the 2016 election and then ...

OH, RUSSIA, YOU MEAN THE FAKE RUSSIA LIE THAT ARE GOVERNMENT TOLD US FOR 3 YEARS!!!!!!!!

AND ALL THE SO CALLED EXPERT, SAID THEY HAD ALL THE EVIDENCE THEY NEEDED IT.

WHAT ABOUT THAT LYING ADAM SCHIFF, WOW HE HAS TO BE THE BIGGEST LIAR IN THE HOUSE!!!

AND HE SETS IN THE HOUSE INTELLIGENCE COMMITTEE, AND HOW MANY TIME DID HE LIE TO CONGRESS!!!!!!!!


James Clapper's perjury, and why DC made men don't get charged for lying to Congress​

In DC, perjury is not simply tolerated, it is rewarded. In a city of made men and women, nothing says loyalty quite as much as lying under oath.​

Newly elected Congresswoman Lauren Boebert said it best at the joint sessions hearing before it was interrupted by the mayhem: “If we allow state election laws as set forth by state legislatures to be ignored and manipulated on the whims of partisan lawsuits, unelected bureaucrats, unlawful procedures, and arbitrary rules, our Constitutional Republic will cease to exist.”

Do we follow the Constitutional or do we make new laws to cheat in a President Election!!!!!

He is saying the same thing, the people that change the law didn't have the Constitutional right to do it.

A judge sitting on a bench, does not have the Constitutional right to do so, All the laws that they change to win a RIGGED ELECTION are illegal laws.

The report is in. And the results are.... unbelievable. When you hear them, you'll understand why I'm calling to decertify the 2020 Arizona election.

Let me break it down for you: